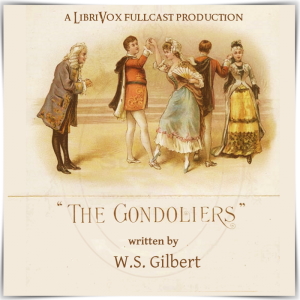 LibriVox recording of The Gondoliers by W. S. Gilbert.
Read in English by Mark Nelson; Beth Thomas (1974-2020); ToddHW; Alan Mapstone; Tom Geller; Larry Wilson; Leanne Yau; Tomas Peter; TJ Burns; Foon; Bhavya; Maria de Fátima da Silva; Aaron White; Naomi Madeleine; Josh Kibbey; Crln Yldz Ksr
In typical Gilbert and Sullivan "Topsy Turvy" style, the King of Barataria has gone missing! He was stolen as a baby and raised in secrecy as one of two gondoliers (nobody knows which) and his wife would like very much to know where he is! The Grand Inquisitor appears in Venice to take both Gondoliers to a life of luxury and rulership - but is dismayed to discover that both are reluctant to leave their wives behind. Somehow two husbands have managed to acquire three wives, and nobody is happy at the idea of marrying a vulgar fraction!

This is a spoken "poetic" version of the libretto written by W. S. Gilbert, where a full cast of voices brings the sparkling wit of Gilbert to the fore, and will enhance understanding and appreciation of this comic light opera. (Summary by Beth Thomas)

Uploaded by librivoxbooks on July 6, 2020